To hell and back in about two hours. That’s how long it takes a cyclist of average fitness to climb the Stelvio Pass. An adventure, yes, but above all a challenge: for yourself, first and foremost, but also against the difficulty of this endless road that seems to reach the sky. The Stelvio Pass is one of those climbs to do at least once in your life; a climb that mingles sweat and hugs, exertion with the screams of enthusiasts who flock to this mettle-testing stage of the Giro d’Italia.

Today it’s easy to think that this road was built with cars and bikes in mind, but originally the purpose was political and military, as evidenced by the trenches and the various military remains from the First World War. Renowned as an engineering marvel, the Pass is set within a natural park and can be reached by three faces: from Prato allo Stelvio, from Bormio and from Santa Maria via the Umbrail pass connecting Lombardy, Switzerland and Alto Adige.

The Stelvio Pass from Prato 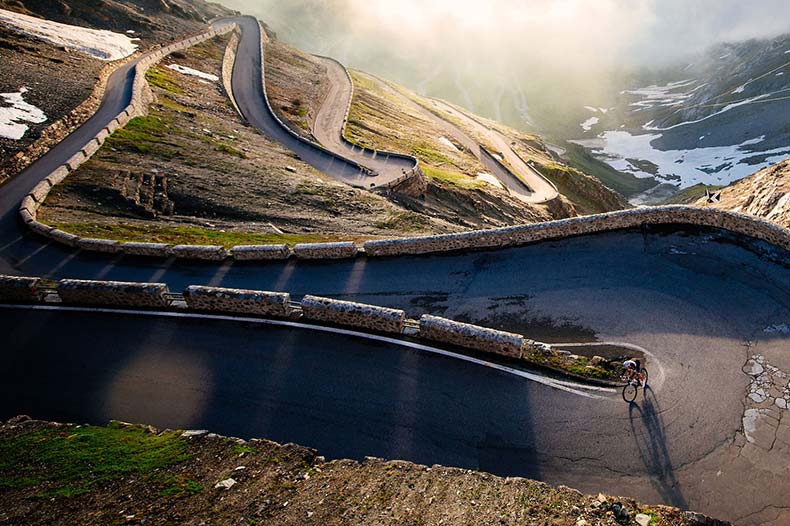 Counting up to 48 has never been this challenging, because with its 48 turns (from Prato allo Stelvio), the Stelvio Pass is the highest crossing ever reached in the history of the Giro d’Italia. The ascent measures just under 25 kilometres and its turns plough a considerable gradient up the mountain face. If it feels as though you’re dying during the climb, don’t worry, even Fausto Coppi felt like that.

Giro d’Italia
The Giro d’Italia crossed the Stelvio Pass nine times, in three of which it was the final stage. In this centenary edition of the world’s toughest race held in the world’s most beautiful country, the Pass will be tackled in a double version in the sixteenth stage: first from the Valtellina face, in other words from Bormio, and then from the Swiss face of Santa Maria val Mustair; the same that was tackled by the Alpine giant at his debut of the Giro in 1953.

Sports events
During the summer months, the Stelvio Pass is the stage for many sports events that offer you the possibility of testing yourself against this legendary climb, like the world’s greatest cycling icons did. To inaugurate the series of events is the Granfondo Stelvio Santini in early June, with three different routes: short, 60 km; medium, just under 140 km; long, 150 km. Three different ways to test your mettle and challenge the other enthusiasts.
Mapei Day is held in July, and has reached its 33rd edition. Limited to 3,000 participants, It’s a unique competition in so far as motor vehicles are prohibited from climbing the Pass.

The cycle of events comes to a close in August with Stelvio Day: festivities, fun and pushing yourself to the limit with a non-competitive spirit. The aim is to enjoy the spectacle of nature and take in the legendary atmosphere. And it’s all for free: there is no registration fee and the fact that the area is off-limits to motor vehicles on all three mountain faces, represents the perfect opportunity to fully enjoy the event.