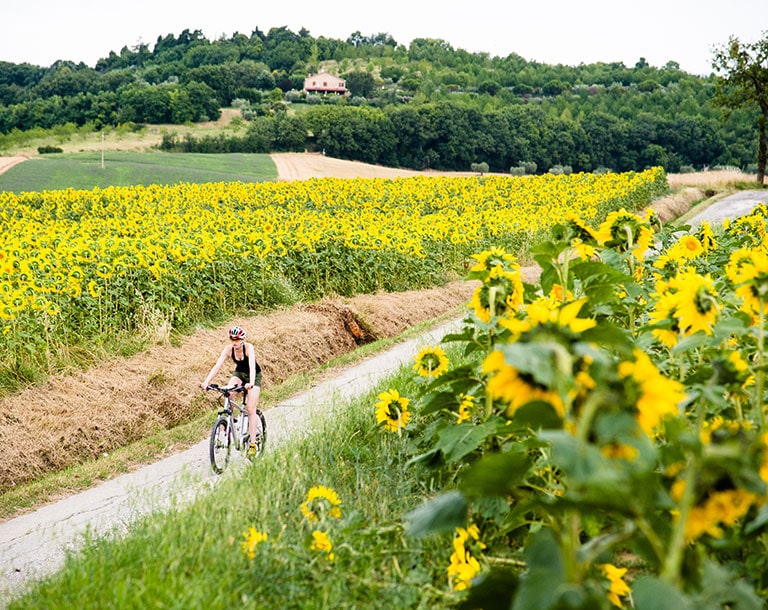 With more than a third of its land covered by national parks and protected areas, Abruzzo boasts a more diverse collection of cycling trails than any other Italian region.

Its verdant inland hills and imposing Apennine peaks combine to…

With more than a third of its land covered by national parks and protected areas, Abruzzo boasts a more diverse collection of cycling trails than any other Italian region.

Its verdant inland hills and imposing Apennine peaks combine to make your cycling holiday a one-of-a-kind experience, not to mention exhaustive in every sense of the term. Mountainside and hilltop trails of rare beauty await you here, as you discover ancient abbeys, hermitages and sanctuaries or, if you’d prefer, relax along the coast, winding along the Adriatic Cycle Path (Ciclovia Adriatica Abruzzese).

Hundreds of kilometres of tracks and trails will leave you spoilt for choice, winding through a stunningly pristine landscape that hints at the region’s pastoral heritage. The result – no matter what your style of riding or passion for cycling entails, Abruzzo’s got you covered.

Thin pancakes, dusted with pecorino cheese and cinnamon, and covered with chicken broth (‘mbusse means ‘soaked’), scrippelle are a typical dish in cuisine of Teramo. Similar to French-style crêpes, they are used in the preparation of timballi, but can also be oven-cooked like cannelloni.

These fragrant and delicious lamb or mutton skewers, which are cooked over coal grills, are a favourite main dish in Abruzzese culture.
Three essential factors give the dish its characteristic flavour: the cooking process, the type of grill employed and the temperature of the fire.

Brodetto alla vastese (or ‘lu vrudatte’ as it is known in the local dialect) is a typical seafood dish. A true brodetto is made from at least five different types of fish (skate, red mullet, cuttlefish, shellfish and giant goby), all of which must be as fresh as possible, cooked in garlic, peppers and chunks of red tomatoes. That’s all the preparation you’ll need – the fish doesn’t need to be turned in the pan; instead the pot is stirred to allow the ingredients to mix.

Abruzzo is one of Europe’s greenest regions, with the towering rock formations of Gran Sasso attracting hoards of hikers, cyclists, rock climbers and skiers, and Majella National Park offering views of untamed and unspoilt nature. It also boasts one of the strongest artistic heritages, with 23 villages listed among the most beautiful in Italy. This is a spot where art and nature collide: it’s easy to find yourself in bustling stone villages, dotted with abbeys and nestled among the mountains, or in sanctuaries and hermitages at the edge of antique woodlands.

Coastal areas also preserve traces of the region’s past; the ancient town of Giulianova in the province of Teramo, for example, is home to ‘Il Bianco’ Tower, the largest remaining remnant of the old walls that once enveloped the city. Meanwhile, Martinsicuro (TE) houses a preserved proto-historic town.

The best cycling routes in Abruzzo