Wish, dream and click. The Dolomites, with their unique conformation, thousands of trails and incredible views, are a real paradise for mountain bikers, and should be visited by every biker at least once in their life.
The Dolomites are a majestic mountain range in the Alps, located in the north-eastern part of Italy. Eternally enjoyed by hikers, rock climbers, mountain climbers and trekkers, today its trails are shared with mountain bikes and offer a real and fulfilling Alpine experience. Ranging from wide to free-flowing routes for beginners, to narrow and technical single tracks for the more experienced bikers, with dozens of tracks dedicated to enduro and downhill rides, even within the bike park. But that's not all, road cyclists can also enjoy this area, thanks to the epic climbs that have marked the history of the Giro d'Italia, which are a must-have in their cycling passport.

We at Italy Bike Hotels are trying to explain what makes this mountain range so spectacular and unique. This little review is full of advice and tips on how to experience a bike holiday in Italy without getting bored; the key is chasing adrenaline. Are you ready to accept the challenge?

There are many climbs in Italy, but out of all of them, the Fedaia Pass is the most enviable in the world. It’s no coincidence that a high calibre professional cyclist stated that he has never climbed an ascent of this sort on France’s roads. But Fedaia isn’t just one of the most enviable climbs, it’s also one of the Dolomites’ toughest.

The Pass at 2,066 metres can be reached via two faces: Trentino and Veneto. The challenge is to reach the Caprile peak (the Veneto face), a climb made famous by the various stages of the Giro d'Italia and its gruelling slopes. Having conquered the mountaintop, all that remains is to enjoy the view of Lake Fedaia, in which Marmolada, the Queen of the Dolomites, is reflected.

The only Dolomite group to rise to the west of the Adige River, the Brenta Dolomites extend entirely within the borders of the Adamello-Brenta Natural Park. There are 8 peaks that reach over 3,000 metres, and most of the others exceed the 2,500 metre mark. The Brenta Dolomites territory offers a mix of many opportunities, in which the common factor is the elevation gain and the high altitudes you reach.

What if we told you that the Brenta Bike Park track was called "Sfulmini", from the word lightning? You reach the valley faster than you could ever imagine, ready for the next tour.

Accessible thanks to the Pinzolo town cable car, Brenta Bike Park is located at an altitude of 2,100 metres, at the top of Doss Del Sabion. The track offers many exciting opportunities: stretches along wooden walkways, wallrides and jumps, until you are completely surrounded by the woods leading to Prà Rodont at 1,500 metres, where you take the chairlift to the next stage: a DH super Flow on mixed terrain. 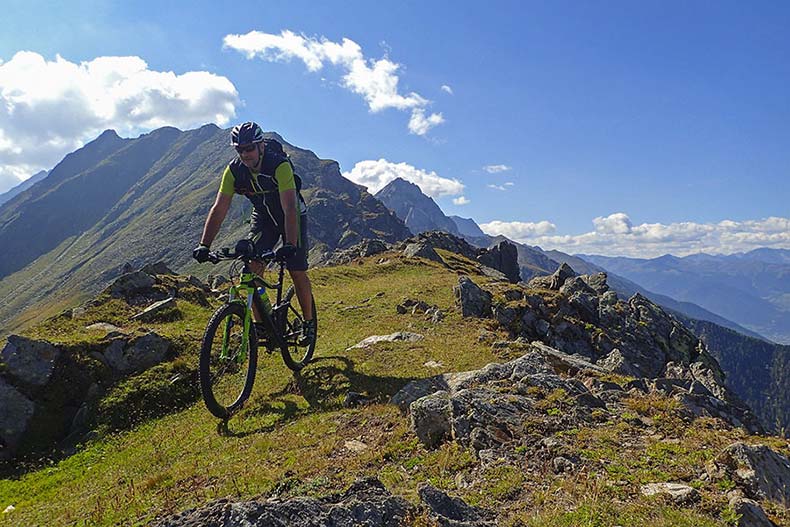 Hey you, demanding biker... note this name: Propain Trail. It’s located on Monte Sole di Silandro, and is the most well-known and cycled trail in Alto Adige & South Tyrol that owes its fame to its technical characteristics: free-flowing, wide and narrow bends, several stretches in a row, but also bends with demanding sections. Monotony is not exactly its strong suit.

Another great classic is the Holy Hansen Trail. Created by a biker for bikers, this itinerary winds through a route whose strong point is variety: a fun trail enhanced by diverse switchbacks, faster sections and small jumps.

Of all the Dolomite groups, the Sesto Dolomites is the only one to take its name from a town, that is, Sesto, which extends between the province of Belluno and that of Bolzano. Around Sesto there are no limits for cycling enthusiasts: verdant landscapes, mountains rising to the azure sky and idyllic villages make every cyclist’s heart race. The panorama alone is worth the trip to reach it. From the legendary Stoneman Trail, a 120 kilometre trail with more than 4,000 metres of elevation gain, to the numerous sporting events that take place in this area, above all Dolomiti Superbike.

There is also plenty of excitement for Enduro enthusiasts, thanks to the new "Orto del Toro" trail with a view of the Tre Cime di Lavaredo, or three peaks, and the Enduro Single Trail Tour: 4,500 metres of elevation gain with 5 cable lifts, all descending via single trail .