ROAD - ONE WEEK TO BIKE, RELAX AND TASTE GOOD WINE 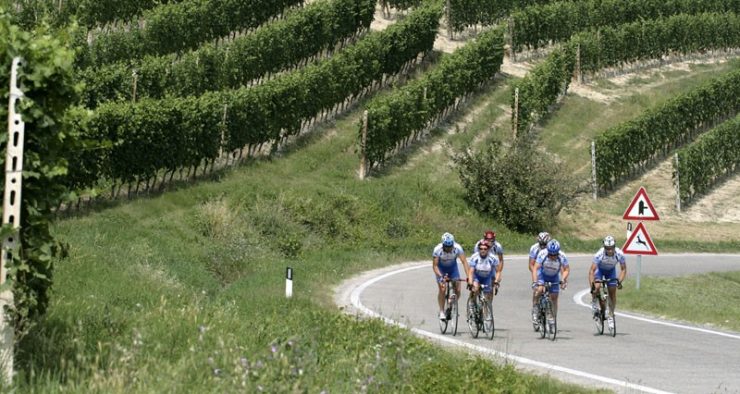 First excursion – A dive into the checkered sea

55 km / Difference in height 500mt. As soon as we leave, we will find ourselves almost immediately in front of the immense checkered sea of ​​the Po valley and, going down a long descent, we will dive into its the rice fields. We will see the abbey of Lucedio where the Marquises of Monferrato rest in their eternal sleep, the church of S. Maria delle Vigne with its “devil’s score”, the Saletta where legends tell of esoteric cults inside its abandoned church and accompanied by the aura of mystery that surrounds these places, and then we will reach Casale Monferrato. Once we have visited its cathedral, we will set off again along a road which, gently climbing through the vineyards, will lead us to the point of arrival.

Second excursion – Monferrato, the cantonal stones and the infernots

50 km / Difference in height 490mt. After passing the Rocchetta hill, in the distance we will see the church of Treville which, like a motionless sentinel, will accompany us for about 10 km and then reach it, passing by a narrow asphalted road that runs surrounded by woods and vineyards, we will pass through its square, one of the most panoramic places in Monferrato. We will visit the Romanesque parish church of S. Quirico and then cross the villages of Cella Monte and Rosignano. We will go back along a very panoramic road that runs on the ridges of the Casalesi hills to then reach the town of Pontestura and then the destination.

Third excursion – The legend of Erbaluce

55 km / Difference in height 600mt. A bicycle tour to discover the secret life of the vines that produce the precious Erbaluce, the wine that since 1600 has been synonymous with Canavese excellence, in the north west of Piedmont on the border with the Aosta Valley. The tour winds its way through the gentle hills where the legend of Erbaluce was born, roads with little traffic that run along some lakes in the area, such as Lake Candia. During the Tour we will lap the Castle of Agliè (whose construction dates back to the XII century) and we could visit Villa Meleto, Guido Gozzano’s summer residence (belonging to the literary movement of crepuscularism).

50 km / Difference in height 450mt. A bicycle tour that represents a journey through time: from the reconstruction of the ancient stilts of Anzasco on Lake Viverone, we will travel the roads through the hills of the Serra Morenica (the largest moraine in Europe), up to Ivrea which is recently became part of the Unesco Heritage as an industrial city of the 20th century. During the tour we will be able to admire the unique panorama of the Serra d’Ivrea: formed in the Quaternary during a great glaciation, it embeds Lake Viverone, the heart of the Morainic Amphitheater of Ivrea, like a precious gem. We will partly travel the roads of the Via Francigena immersed in the typical vineyards of this area and by some churches that testify to the passage of the Pilgrims. Once in Ivrea we could taste a slice of the Novecento Cake whose recipe has remained secret since its invention (late 19th century).

After bike drink and snack

1 visit to our wine cellars and tasting (Sunday mornign)

per person in double room
Get a quote

Go to the hotel